Before I was a librarian (by which I mean from the time I was about 3), I read a lot.  As a baby journalist in the early 1990s, I started reviewing books and discovered the fun and wonder of sometimes getting paid to read. Which didn’t stop me from continuing to do it for free.

Since becoming a librarian, I have discovered that what I read has now taken on the weird addition of having some sort of Mystical Librarian Stamp of Approval.

I have noticed this both in and outside the library.

So, without further ado, I thought I’d share some of what I’ve been reading lately.

“The Wonderling” by Mira Bartok

I just finished this and wish I hadn’t, because I didn’t want it to end. I’m probably going to read it again. Soon. Evidently there’s a movie deal in the works, and it’s easy to see why. Bartok’s imagination pantry is a well-stocked place, and she’s a great cook.

Because we tend to like our comparisons,  I’m just going to say that this book is what you might get if you tossed Frances Hodgson Burnett, Charles Dickens, Phillip Pullman, Garth Nix, JK Rowling,  Charles deLint and an afternoon soap opera into a blender. Perfect for the tween set and anyone who loves getting lost in a good yarn. (My nephew is totally getting this for Christmas.)

“What this story needs is a Vroom and a Zoom” (A Pig in a Wig book) by Emma J. Virjan

The Grandkid (aka my favorite small person) was over last night and I read this aloud to him. That was after reading it aloud to Sweetheart. Grandkid was riveted, which is pretty impressive given that he’s 19 months old. Not so surprising, though, because the story is about a race and like Sweetheart, he’s a big motorized things fan. Good for car enthusiasts. Also wee people and the people who love reading to them.

“Unorthodox: The Scandalous Rejection of my Hasidic Roots” by Deborah Feldman 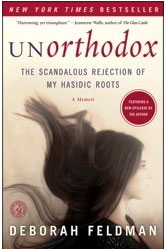 This one is a library weed my sister told me to read years ago. (There are plenty of copies available in other branches). Feldman describes growing up curious in a religious sect that frowns on imagination and constrains its adherents to the narrowest of options. I have a particular bias for these types of books, partly because I’m in the process of work on a book-like object in a similar genre and partly because someone in our own family a generation back made a similar break, although from a far less (though still plenty) restrictive sect.

Being raised by her grandparents after her mother broke away when she was small, leaving her behind, and a father who was part of the community but incapable of caring for her meant she was slightly different and suspect from the start. Growing up, she knew to hide her love of reading and keep trips to the public library secret. As an adult, watching the community protect ideals over exploited and injured community members pushed Halpern to pick a side. In the war between her love for the grandparents who raised her and the chance for her child to grow up whole, she chose her son.

Yeah, she’s my sister and yeah, the book is set in on a fictional farm that draws heavily from our family’s farm.  But this Depression-era story of a kid from New York City who spends a few months with her grandparents provides a kids-eye view of life in tough times without a bunch of moralizing and commentary. Same goes for Jewish ritual and practice. It’s all very matter-of-fact and organically woven in to the story, mostly told through the relationships between Miriam, her grandparents and the hired men who help run the farm. Also, anyone who is my cousins will laugh themselves silly at the grandmother in this story. To say ours was never that tender is a major understatement.

I’m only on page 23, which is okay because Book Group isn’t until next week. But already I’m looking forward to bedtime so I can read more of this story by a lawyer who has made addressing inequities around mass incarceration and the death penalty his life’s work. And I’m very grateful to Sally for choosing it for us to read. It’s been on my list for awhile, and this is the push I needed to get off my tush and read it. 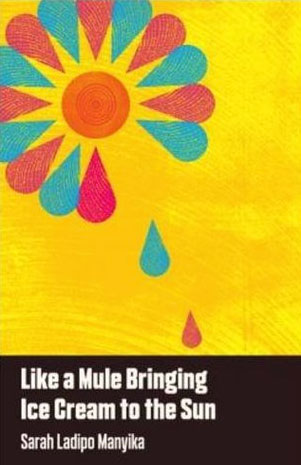 It’s very short, only 118 pages, but so very good. Another book club pick, this one thanks to Cynthia, who hosted last month. I’ve never met a protagonist like Morayo, maybe because most of the fictional 75-year-olds are supporting characters who are usually supported. By a cane or a wheelchair or some other old-person marker. Morayo is  single, childless, a retired academic who drives a Porsche and is and living the good life in San Francisco. Well, that is, until she falls and breaks her hip. Maybe it’s because I have a mom in a nursing home. Maybe because I’m getting older and have a slew of friends who are single and childless. But this book really resonated. Also, anyone who arranges their books by how well their characters would get along, as Morayo does – real or not – is my kind of person.

I should probably spend less time reading these, but there is this one group to which I belong that is feeding my brain-growing side a lot. I can’t talk about it, because it’s a secret group. But it’s very good for my soul. And it’s good for my soul to keep up with the people I value in 3D, given our sometimes way-too-busy lives.

Not as much here, but it’s interesting to see what people think and to get information on breaking news stories – bearing in mind, of course that it’s always best to verify.

Twitter is also a good place to remember how little you matter if you are not a brand or a celebrity. Most of my posts are met with radio silence. I might as well be posting on my bathroom wall. But it’s okay. In 100 years, no one will care anymore about most of what’s happening now anyway, and so in at least one sense, my tweets are on the leading edge of a curve!

Because I drive. And sometimes ride my bike.

Yesterday, in Mom’s room. As part of my alternative Yom Kippur observance.

“Believe Me: A Memoir of Love, Death and Jazz Chickens” by Eddie Izzard

See above about “Unorthodox” and book-like objects. I am a big Eddie Izzard fan, so when I saw this on our “New” shelf, I was all over it. I read it at work and wrote a review for a future issue of the library newsletter. It’s pretty humble stuff for a celebrity memoir, mostly him describing what it was like before and after his mom died when he was six, his decision to live as openly transgender in 1985 and the process that led him to be able to carry that to his onstage persona, which, for years he stuck to what he describes as “boy mode,” and generally his operating philosophy, which is to act as if you’re capable of more than you are. It’s actually a very Jewish concept (not that Eddie said that) – the “engage in action and intent and belief will follow.”

Sweetheart and I have tickets to see him here this coming weekend, and I’m looking forward to it.

“Liner Notes: On Parents & Children, Exes & Excess, Death & Decay & A Few of My Other Favorite Things”  by Loudon Wainwright III

I just started this one, too, at work. What I said about “Unorthodox” and “Believe Me.” It’s interesting to read in narrative form about some of what he’s written and sung. You get a bigger picture and context, and it’s fun to be a fly on the wall for his encounters with Leonard Cohen, Bob Dylan, Judd Apatow and other household name-type people. Because I’m also a big fan of the work of his singing family members and friends (Lucy, Martha, Rufus, Sloan, Chaim Tannenbaum, Suzzy Roche and the McGarrigle Sisters), reading about them is kind of like getting to hang out with people you know but not so well and learning more about them.
On a separate but related note, I will always have a tender spot for LWIII, who gave me what remains one of the nicest compliments anyone ever has about my writing. I profiled him 12 years ago for a piece in our local alternative paper. When he showed up for the gig, I asked him to sign the story. He said “I read it over dinner, and it didn’t even give me indigestion.” When I told this story to Suzzy & Lucy a couple of years ago, Lucy’s comment was “That sounds like him.”

“Toad on the Road: A Cautionary Tale” by Stephen Shashkan

What I most like about this picture book is that you can sing it as your own improvised blues tune.  It probably works in other genres, too – punk, jazz, plainsong, recitative, rockabilly. It’s adorable, funny, charming and features a female tow-truck driving working mother. Which is pretty much everything.