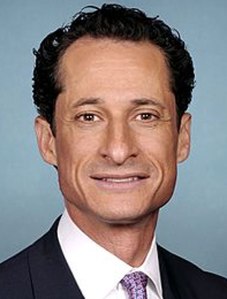 Yesterday’s New York Times featured a story about Anthony Weiner, the former congressman who decimated his family and career by engaging in virtual sex with random women and a teenage girl.

In November, he will report to prison to begin serving a 21-month sentence, after which he has to register as a sex offender.

There’s no need to go into the details here. That’s not the point of this post. Suffice it to say that they’re easily obtained elsewhere (not that I have done a ton of looking).

The whole mess is sad on multiple levels. Weiner was married to an accomplished and beautiful woman. Their son was very small when the first scandal broke and 15 months old when the second became public. I know that last because evidently the baby was in the room with him when he was engaging in behavior I would rather not think about. So that bit was mentioned in the news stories at the time.

This morning it hit me that Weiner is Jewish. I don’t know how or even whether he connects religiously with that. But he was sentenced during the Ten Days of Repentance. That got my attention at a much deeper level than it would have had the sentence been handed down at any other time.

Between Rosh HaShanah (the Jewish New Year, which was last Thursday) and Yom Kippur (the Day of Atonement, coming up this Saturday) is a 10-day period when we examine ourselves and our behavior and are judged accordingly.

I was going to look for something succinct to explain it, and then remembered that I wrote a story about it for our local Jewish community paper. In it, I interviewed two rabbis and a rabbi-in-training about what they do during that period, and what we can do.

Here’s me, quoting myself:

“The period is seen as a time when every Jewish adult is on trial. But rather than taking place in a court of law before a jury of our peers, the setting is inside ourselves, and God is the judge. In synagogue, we engage in communal prayer and communal confession.”

Outside of synagogue, we think about ourselves, not in a narcissistic way, but in a way that hopefully allows for us to be better people.

I spend this period examining things I’ve done over the past year of which I am proud and not so proud, and consider ways to do better moving forward. I also make a point of seeking out anyone I have upset or who has upset me and either apologize or forgive, as the case may be.

There is a passage in the holiday liturgy we repeat more than once that basically says for wrongs committed against God,  the Day of Atonement atones. But for wrongs committed against other people, the Day of Atonement does not atone.” Or, to put it another way, we need to take care of our own apology and forgiveness business. (There’s an interesting article about it in Psychology Today.)

It can be awkward, but it’s also purifying. This year, I have upped the ante a bit. Yesterday, I focused some apology/forgiveness mojo on a work aspect that’s sometimes made me feel at sea. I don’t know if the person I spoke with quite understood the timing, but we came away with a better understanding of the other’s point of reference, and that will affect the way we work moving forward.

So, in all this introspection and focusing on self, the timing of Weiner’s sentencing didn’t hit me until this morning. I don’t know what, if anything, it means to him. But it brings to mind, for me, the second paragraph of the Unetanah Tokef, a part of the liturgy on which Leonard Cohen (z”l) based his song “Who by Fire.”

Here is a translation I found on wikipedia: