This morning, I woke up to the Facebook village and Twittesphere going nuts over what happened when Vice-President Elect Mike Pence went to see “Hamilton” last night.

My first thought was “Geez! If I’d known becoming vice president would have helped me get ‘Hamilton’ tickets, I would have applied for the job.”

But who am I kidding? There’s no question that my political leanings, vagina  and average looks would have completely disqualified me from consideration.

On a more serious note, there were a couple of FB posts calling what the cast did “rude and out of line.”

My question, voiced to those posters, was this: When would they have been able to have that kind of access and opportunity to be heard? And that doesn’t just go for the cast of “Hamilton,” who, once the makeup and costumes are off, are just ordinary working Joes and Janes like the rest of us.

Their 90-second address, delivered by Brandon Victor Dixon, the actor who plays Aaron Burr, was a respectfully-delivered request. He spoke to the fear and anxiety many people are feeling about their well-being and that of people they love and care about. He refused to let the audience boo Mr. Pence.

It was a heartfelt speech, a request for reassurance in a situation where it is becoming increasingly apparent that reassurance is needed.

From all I’m seeing, the Trump/Pence administration is going to do everything it can to limit access to anyone who doesn’t agree with everything they believe in or want to do. This includes the press, which they seem to want to keep in the dark as much as possible. That scares the you-know-what out of a lot of us.

So Friday was a singular chance to be heard, and the cast seized its moment.

I’ve been seizing display space at the library, and, because of it was able, yesterday, to seize my own “be heard” moment.

The morning after the election, I cleared out my “He said/She said” display. This (below) is what I put in its place. 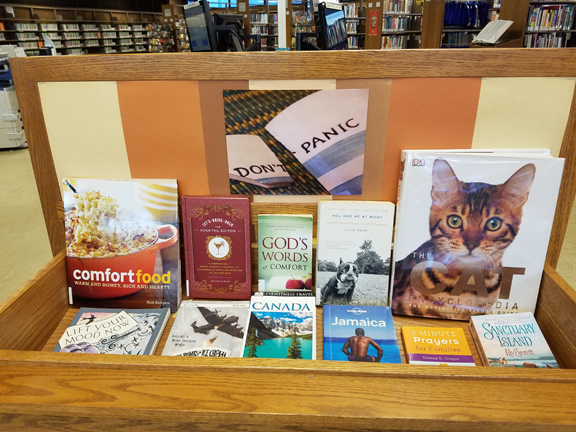 My post-election display. Someone has already taken out the cat book (replaced with another cat book). I borrowed “Comfort Food” last weekend  and made maple glazed baked beans for Book Group. The book next to it is a recipe book for making cocktails. My fabulous manager, Amelia, helped round up books for the display – Cats, Canada and Jamaica were her finds.

Then, this past Wednesday, one of my favorite recent reads, Colson Whitehead’s “The Underground Railroad,” received the National Book Award. So Thursday, I made a display. It was an Oprah’s Book Club selection, so I didn’t think she’d mind me borrowing this 2004 shot of her looking extremely happy (she was giving away cars). On Friday, a woman came in looking for the book. I felt just like Oprah when I handed it to her. I also seized the opportunity to recommend “Underground Airlines” by Ben Winters and “The Sellout,” by Paul Beatty, which just won the Man Booker Prize.

I hope that woman likes the book and comes back for the others, but even if she doesn’t, seizing a moment to share something valuable is a valuable thing to do.

So go out there and seize your chance to be heard. In the face of uncertainty, a little love and reassurance  (in many forms, including between the covers of a good book) can go a long way.

Kudos to the “Hamilton” crew for showing us how to do it with grace and dignity.