While Sweetheart and I were somewhere loud and happy Saturday night (a wedding),  loud and not-so-happy things were happening close to us.

In the morning, my friend Walter, a Baptist minister, posted this selfie on his way to his church. He invoked Nehmiah 1. 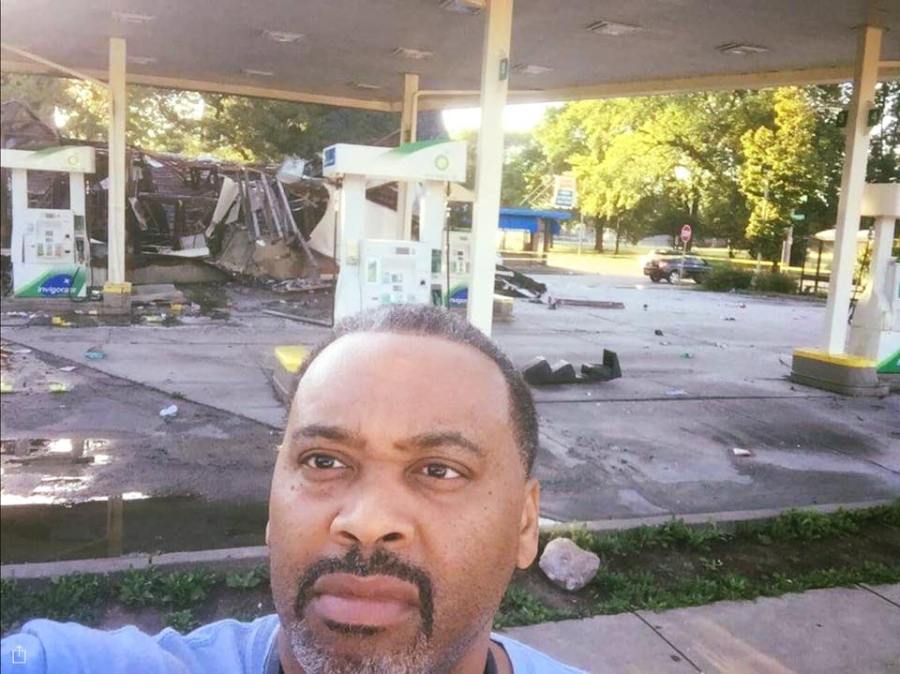 By then, we’d heard the news. Riots had broken out hours after a police officer shot and killed a 23-year-old who’d refused to put down the gun he was carrying. Mobs of people gathered, shooting in the air, burning businesses and, according to one video on Facebook that I did not watch, looking for white people to beat up.

There were photos of the businesses that had been burned. A gas station. A bank. A beauty supply store. Before it burned, looters were carrying out bags of weaves.

My house is a mess. We got written up by the city for “weeds” (we have a  prairie in our front yard). I do not spend enough time with my mother or my grandson. But it could be worse. I didn’t lose my business, and I still have a job to go Monday.

It would be great if the world got better by burning things down, but it doesn’t. It just makes more heartbreak and fear which, last I heard, isn’t high on the list of building blocks for neighborhood stability.

I had to go over there and see if I could help clean up something. I’ve driven by that gas station a gatrillion times, and when I go downtown after work, I drive past the bank and the auto supply and beauty supply stores that were burned.

I wasn’t sure what I’d find when I got to the intersection a few hours after Walter had left. He’s black and big, and I am white and not. It didn’t matter. Being afraid isn’t enough of a reason not to do something that matters, and for some reason I couldn’t articulate, this mattered.

What I found were groups of people in the park across from the gas station. I instantly recognized my neighbors, Michael & Carolina. On the grass just off the sidewalk, three people were sitting alongside a pallet-sized stack of bottled water. There were bags of gloves and cartons of garbage bags.

“People are just going out and cleaning up,” Michael said. He and Carolina had been there long enough to fill a couple of bags, and were taking off.

I got a pair of gloves and a bag from a woman, who told me that the effort wasn’t really being organized by anyone. People were just showing up. (Click here for a photo, courtesy of Neighborhood News Service.)

“Kind of like last night, only not” I said. She knew exactly what I meant. I headed out with my garbage bag and a pair of yellow gloves, the kind you use to wash dishes.

I hadn’t taken more than a few steps when a young black man asked me something about where the organizers were. I told him what I knew and pointed to the water stack. Then I asked if he wanted to pair up.

Which is how I met Chad, an electrician who recently bought his first house, some 20 blocks away from where we were (roughly the same distance away as Sweetheart and me, but in a different direction). We headed east toward the beauty supply store. There wasn’t a whole lot to clean up, but we picked up some trash, and some glass. And then I saw the bullet casing outside a storefront. I photographed it, then picked it up and showed it to Chad.

We chatted between his cell phone ringing intermittently as he told people where he was and what we were seeing, and as we got to the beauty supply store, his phone rang. His cousin had come to help out. He went to meet her. The street had been cleared of glass and the windows were boarded up, but the ground between the board-up and sidewalk was a mass of piled glass. I dug huge chunks out of the dirt, filling up my bag.

Chad returned and introduced me to Tiffany, who’s working on her master’s degree in public health and works in the field already. We walked and talked as we made our way along the street, surveying the damage and talking about upcoming community events we knew about and were involved in. When we got back to my car, I gave Tiffany my gloves, and asked if they’d be willing to be in a picture. We got another passerby to take it.

I took quiet comfort in the presence like-minded strangers who care as much as I do about the city I love and call home.

The mom and daughter from Whitefish Bay who were picking up garbage, the woman in traffic who called out from her car window to ask where she could drop off donations, and all the other people we saw along the way. Some were cleaning up. Some were just walking along. The front-seat passenger in carload of girls in an SUV announced (with a dash of salt in her tone) that they’d been there the night before.  In the park, groups of people were gathered in prayer circles, including a shirtless guy with a huge snake hanging from his shoulder.

There was a lot of work to be done before last night, and a lot of good people already doing it.

One thought on “Police shootings, mob violence and the comfort of strangers: A Dispatch from Milwaukee”