There are a lot of reasons I miss having a dog. Election season is one. Tuki used to come with me when I voted. 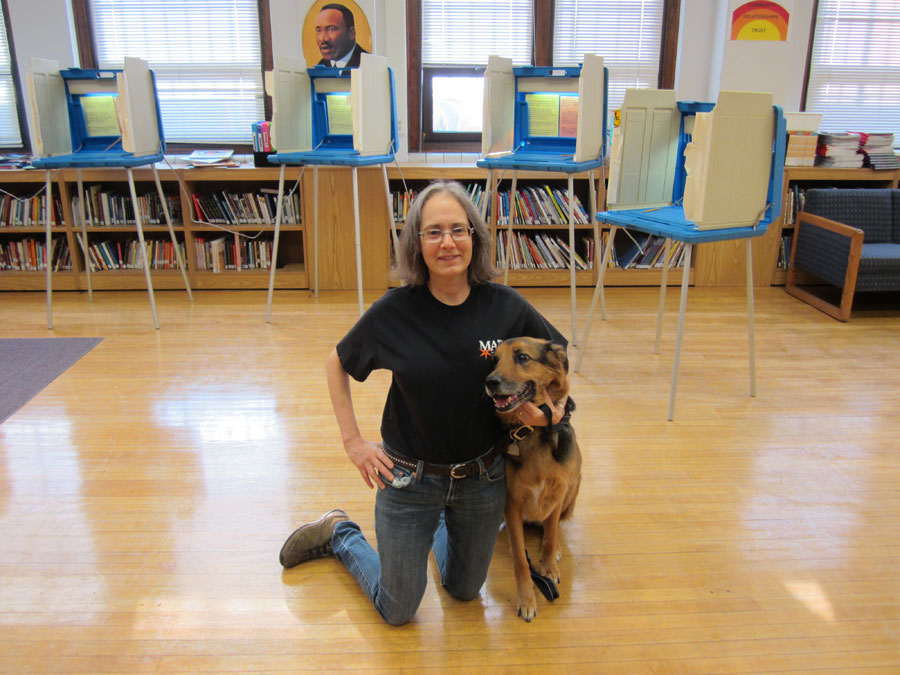 She was also my candidate of choice on more than one occasion. I voted for Tuki when it was clear that, compared to the humans on a ballot, she would represent my interests more competently.

I wrote in Tuki for County Supervisor the whole time Lee Holloway was in office. The only time I ever saw him at my door was after a pension scandal (he and his fellow supervisors voted themselves and county employees fat pensions at the expense of the county’s well-being). When I asked him about it, he got owly. His opponent had no political experience and misspellings on her campaign literature. Tuki was the clear winner.

Even before she died in November, I knew there was a viable human candidate for County Supervisor this coming April. When my friend Mike found out I’d been laid off last July, he told me he was running and asked if I’d be willing to help with his campaign.

Lke me, Mike is a progressive communitarian. Of course I’d be willing to help!

Also, I quite adore him. I also adore his wife Trudy, their kids Jon and Carolyn and their special needs dog, Turbo. (Turbo is an epileptic – but courtly – German Shepherd.)

I asked about specific things he could affect as Supervisor.

So, since fall, Mike’s been walking the district, knocking on doors and introducing himself to voters. By the time it was time to collect the 200 signatures he needed to get on the ballot, he’d gotten a lot of exercise. He’d also gotten a lot of information from his prospective constituents.

It used to be that simple. Candidates declared their intentions by going directly to We the People to talk about who they were and what they’d do, and We the People listened, used our brains to make an informed decision, and voted.

But most people are busy. Or lazy. Some are so turned off by having seen nothing change for so long that they’ve abandoned the process entirely and don’t even bother with elections or voting any more.

All that is a big mistake. Because people – on the left and the right – have figured out how to turn that cynicism and laziness to their advantage, and they’re doing just that. They’ve given up on changing the system. They’re just trying to milk it in order to get more for themselves or keep what they have by maintaining the status quo. And they’re using your brain – with your cooperation – to get the job done.

You can see it working right now in the run-up to next year’s presidential election. Who will Hispanics want? What about women? How do we get the Black vote? What about the Jews? How do we reach White Men?

Local party/organization bosses are exactly the same. They go out and find people they think the Hispanics/Women/Blacks/Jews/White Men will vote for and recruit them to run. Then, they pour money and publicity into their campaigns and send out press releases touting their credentials “S/He went to a rally for {insert cause here} and is an activist in his/her {insert demographic-catnip-sounding group name here}!”

It’s all designed to appeal to your emotions.

Which is reductive and disrespectful. Almost as disrespectful as the fact that these decisions are, by and large, made by people who don’t even live in the districts they’re working to influence.

Anyway, all this to say that during this election season, don’t take anyone’s word for what the person who wants to represent you stands for. When those glossy things start showing up in your mailbox, or if candidates show up on your doorstep, find out how long they’ve lived in your district, what drove them to run, what they want to accomplish in office and how they plan to do it.

Then, stick it to the reductive disrespecters. Use your pre-frontal cortex  instead of your limbic system when you decide who’s getting your vote.

One thought on “My Write-in Candidate is Dead and Reductive Disrespecters Want Your Brain: An Election Season Guide for the Perplexed”